A successful business model is being expanded

About five years ago, the Belgian printing company Halewijn switched the production of a weekly newspaper from offset printing to digital printing with Hunkeler finishing technology. It was the start of a successful business model: readersand associations now had the opportunity to design their own newspapers and magazines. Halewijn has now added asecond production line to its capacity.

It all began in 2013: the Belgian printing company Halewijn NV invested in new technology for the production of the church newspaper KERK&leven (Church and Life).
At the Antwerp site, the former offset process was replaced by a digital printing system and finishing technology from Hunkeler AG. Compared to the offset printing process, the production of the newspaper KERK&leven was much easier: Halewijn was able to complete each individual newspaper copy with the national jacket and the regional section in one pass – „a logical and efficient workflow that was not possible in web offset printing“, says Stefaan Vanysakker, who is responsible for the newspaper project at Halewijn.

The newspaper KERK&leven is published once a week. Its total circulation is around 250 000 copies. In addition to a national section, the tabloid product (280 x 400 millimeters) contains almost 500 different regional editions nationwide with specific editorial content and advertisements tailored to the regional readers. Several partial editions have a circulation of only 200 copies. 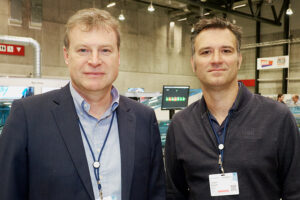